The Konica Minolta Group has decided to sponsor the Women's Health Forum lecture series on women's health in Shanghai, China, on the theme of "Care for Women & Deliver Health " and announced an outline of this series in Shanghai. 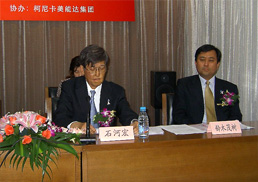 Hiroshi Ishiko, Senior Executive Officer of Konica Minolta (left)
at the press briefing on October 26 in Shanghai.
The Women's Health Forum is held by the Shanghai Women's Federation and the Shanghai Library Lecture Center. It explores women-specific health problems, such as breast cancer and their causes through a series of lectures, with the objective of thinking about issues of women's health in China such as how they can be prevented and resolved.
This lecture series began in October 2007, and five lectures altogether will be given during the period to March 2008. Konica Minolta is collaborating with and sponsoring all five events.
Konica Minolta has already been developing its business presence in China over a decade. The Group is deeply grateful for the wide-ranging support from many aspects of Chinese society that has enabled its continued business activities and Konica Minolta has therefore been considering how to contribute to benefiting Chinese society.
It is said that one in 20 women in Japan currently suffers from breast cancer, and it has been calculated that in China 200,000 women develop it every year, with around 40,000 deaths. This makes it the leading cause of death for women. Aware of this situation, Konica Minolta regards a healthy lifestyle as irreplaceable; the Group donated mammography equipment (PCM systems) to Fudan University Cancer Hospital in Shanghai and First Hospital, Beijing, China's top-level institutions at the end of last year. The Group has thus already been promoting the early detection, diagnosis, and treatment of breast cancer in China, and is hoping these lectures will enable people to understand the importance of regular testing for early detection and treatment as a women's health issue.
As people's lifestyles and their dietary habits change, the rate of breast cancer is rising. The success rate for breast cancer treatment is the highest for any cancer, as long as it is detected early. In China, 75% of women don't have much interest in their own health, and as they lack a good choice of diagnostic methods they miss opportunities for detection and treatment. These lectures will convey scientific methods of prevention and awareness of the disease to a large number of people.

The first Women's Health Forum was held on October 26 in the Shanghai Library Multifunctional Hall. Its theme was “Body, Mind, and Breast Diseases,” and lectures covering the experience of breast cancer and an explanation of its treatment were given by Ms. Pan of the Brand Institute of Shanghai Jiao Tong University, who has herself experienced breast cancer; Professor Wang, party committee deputy secretary of Shanghai University of Traditional Chinese Medicine; and Dr. Yu of the China Development Research Institute Center for Natural Medicine. Many questions were asked by the participants numbering around 350 people, who exhibited enormous interest in the content of the lectures.

The “Pink Ribbon Campaign” for the early detection and treatment of breast cancer is becoming more active worldwide every year, and Konica Minolta supports it through donations and volunteer activities in the USA and Europe as well as through the Group's sponsorship of large-scale events in Japan. The Konica Minolta Plaza (Tokyo, Japan) has held an exhibition in association with the Pink Ribbon Campaign, and is promoting educational activities to raise awareness of early breast cancer detection.
Konica Minolta will continue to be proactive in developing CSR activities that will be welcomed by the global community.