Tokyo (December 22, 2010) – Konica Minolta Holdings, Inc. (Konica Minolta) is pleased to announce that the company has been awarded with Best IR Award in the FY2010 IR Grand Prix Awards by the Japan Investor Relations Association (JIRA). The award ceremony was held in Tokyo on December 21, 2010, where Masatoshi Matzuzaki, President and Chief Executive Officer, received the prize. 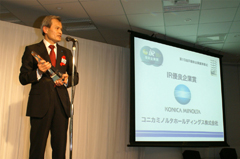 The IR Grand Prix (Head of the judging committee: Masanobu Kaizu, Chief Research Officer at Nomura Securities CO., LTD., Financial and Economic Research Center) is one of the most prominent awards in Japan to recognize companies that have a deep understanding of the intent of investor relations, are actively involved in them, and can point to superior results stemming from a high level of support from persons involved in the market. In its fifteenth year of the program, thirteen winners were chosen from 332 applicant companies that were members of the JIRA.

This is the first time that Konica Minolta is granted with Best IR Award in the prestigious IR Grand Prix. The judging committee acknowledged Konica Minolta's excellence as follows: “As the top management often has opportunities to speak with investors, executive officers in charge of IR are highly capable of effective explanation. The focus of investor relations has been consistent since the 2003 management integration. Konica Minolta's attitude to maintain timely disclosure even through difficult business environment is widely appreciated. The IR Division interacts in good faith with requests from the investors and is willing to facilitate productive disclosure such as technology presentations. Materials for financial results presentations are well balanced, along with the well-organized IR information for ease of use on the Web.”

Konica Minolta is very delighted to have received the great recognition by the JIRA and aims to continue timely, appropriate and fair disclosure for highly transparent corporate management.