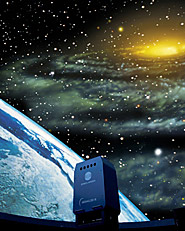 Tokyo (August 6, 2012) – Konica Minolta Planetarium Co., Ltd. (Konica Minolta) is pleased to announce that the company will donate its digital full-dome system MEDIAGLOBE-III to the city of San Pedro de Atacama, the Republic of Chile.

The MEDIAGLOBE-III is a projection system, designed for small- to medium-size domes, to project full-dome digital images. Compact in design, the system delivers a leading resolution among single-lens projection systems and has been installed in a number of planetariums across the world.

The city of San Pedro de Atacama is located at the foot of Mount Chajnantor in the Atacama Desert of South America. On Mount Chajnantor, the University of Tokyo Atacama Observatory Project (TAO Project) has been making progress to build the world’s top-class infrared telescope. With the Institute of Astronomy, the University of Tokyo (IOA-UT), at its center, the TAO Project aims to facilitate astronomic observation that helps explore latest astronomical themes such as dark energy or origin of the Galaxy and planets. The project has been so highly praised in Chile that, during his visit to Japan in March 2012, President of Chile spoke about the TAO project in his official speech.

Cooperating with the TAO Project, Konica Minolta produced a full-dome movie “TAO: Unlocking the Mysteries of Distant Stars” in 2010. During the production, the movie crew stayed in San Pedro de Atacama as their base camp and recorded memorable landscape and starry images in the city and at the top of Mount Chajnantor.

The installation of the MEDIAGLOBE-III will present exciting new opportunities for people of and visitors to San Pedro de Atacama, known as town of astronomic observation and studies, as well as tourist destination, to enjoy dynamic and detailed images of the universe based on the results of the latest observation. Additionally, children of Atacama will feel proud to be part of the city where the most advanced astronomic studies are developing and be encouraged to learn more about astronomy and space science when they earn new knowledge on cosmic explorations through planetarium shows.

Under the communication message “Giving Shape to Ideas,” Konica Minolta has been assisting academic and research projects across borders to make discoveries and create new values. In the future, the company will continue globally sharing the outcome through its diverse businesses and social contributions.