Message from the Chairpersons of the Nominating Committee,
Audit Committee, and Compensation Committee 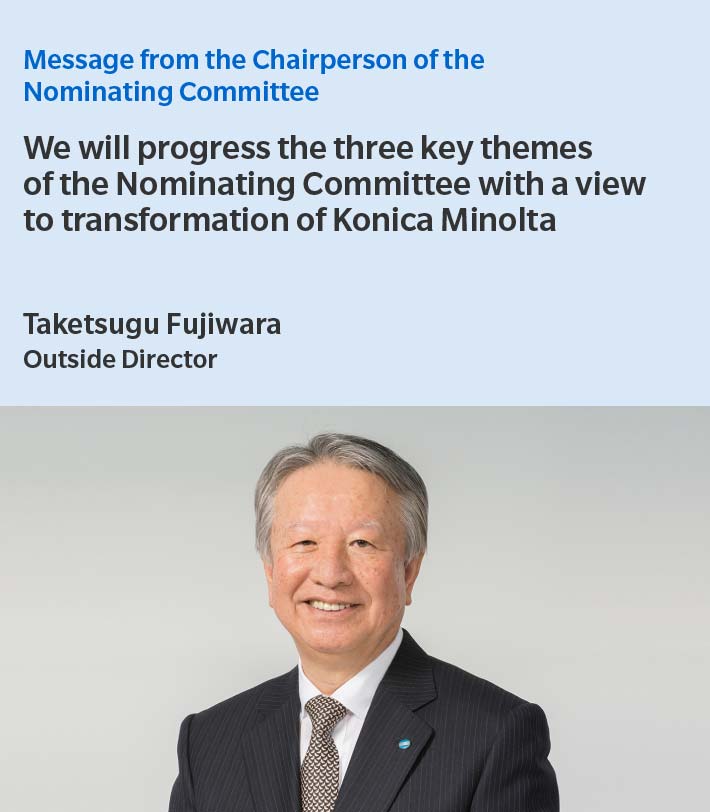 1.Review of the objectives of the composition of the Board of Directors

2.Decision on Director candidates to be submitted to the General Meeting of Shareholders

3.Oversight of the succession plan (development and selection) of the President & CEO

The current President & CEO implements the succession plan and its processes and establishes the schedules of the plan, while the Board of Directors holds the authority to decide on the next President & CEO. Meanwhile, the Nominating Committee has responsibility for overseeing the selection process of the next President & CEO.
Specifically, the current President & CEO submits a report to the Nominating Committee about once every half year regarding clarification of qualifications and requirements, selection of successor(s), development and implementation of a successor development plan—including challenging assignments—and confirmation and assessment of the status of successor development. The Nominating Committee oversees and gives advice on this report.
The President & CEO, based on opinions and advice of the Nominating Committee, implements the successor plan PDCA cycle. This process is considerably entrenched in the Company and is being utilized in finding and developing successors for the next and following generation CEOs. Moreover, I feel this process has appropriately established opportunities (such as Board of Directors meetings and forums of Executive Officers) for Outside Directors to grasp the character and observe firsthand the speech and conduct of successor candidates.
In working toward these three key themes, I give my opinions and advice related to the conditions required of top management and key points for nurturing such personnel based on my own management experience.

The needs of society with respect to corporate governance and the material issues of corporations are significantly changing. Additionally, Konica Minolta is progressing with two transformations (achieving high added value in Office Printing Business and building another mainstay business to replace the Office Printing Business).
Against this backdrop of changes in our operating environment, in future, there is ample possibility that what is required of our Directors and Executive Officers will change from what has been the norm until now. The Nominating Committee will operate so that it functions appropriately, while constantly focusing on the fact that it will be necessary to review the ways of thinking and ways of progressing the three key themes. 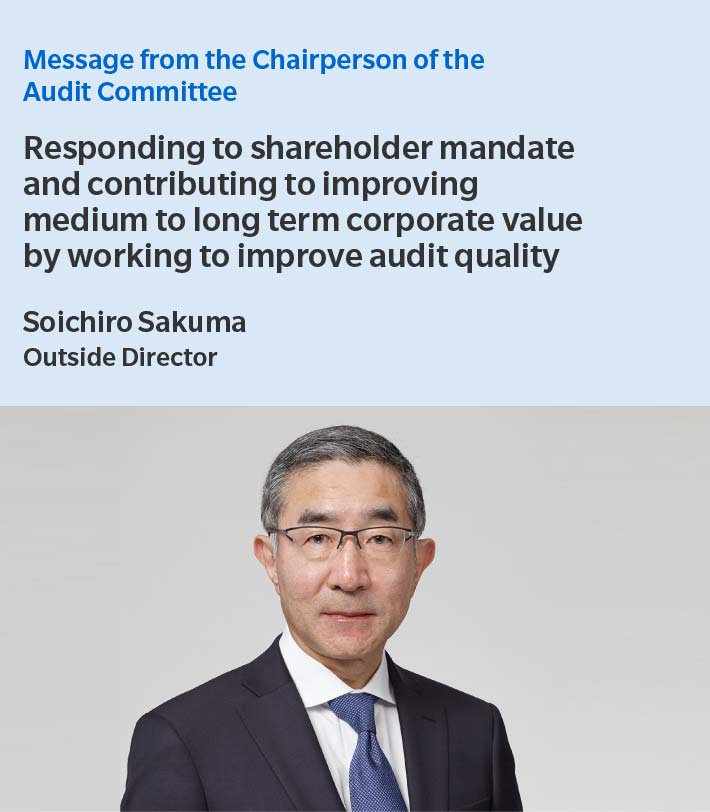 profile
At Nippon Steel Corporation and Nippon Steel & Sumitomo Metal Corporation (currently Nippon Steel Corporation), Mr. Soichiro Sakuma was involved for many years in management in the manufacturing sector and was in charge of main head office functions, including general administration, human resources, environment, and IT, handling primarily legal, internal control, and auditing operations. He has extensive experience and a broad range of knowledge as a corporate executive. Mr. Sakuma was appointed Outside Director in June 2020.

The Audit Committee conducts its audits with whether business execution departments are promoting strategy in a systematic and planned manner in mind—based on the basic policies of DX2022: ‘Leap to highly profitable businesses through DX’ and ‘Evolve into a company clearly committed to solving social issues.’
Firstly, regarding portfolio transformation into a solutions business that is progressing with leveraging imaging-IoT technologies, we focus on whether the work by business execution departments towards promoting this strategy is being undertaken in a certain and timely manner. Moreover, we examine the effectiveness of work toward securing and nurturing imaging-IoT human capital vital for portfolio transformation. We also inspect the revision of our business portfolio that is being undertaken in conjunction with the portfolio transformation into a solutions business from the perspective of risk management and the rationality of decision making of business execution departments.
Further, regarding the five material issues that are key to our contributions to solving social issues, we confirm the implementation status of each measure established for each material issues and follow up to see whether the measures are contributing to improving corporate value in the medium to long term. Additionally, I personally strive to provide advice in a timely manner regarding responses in anticipation of policy changes and the global status surrounding ESG and SDGs—based on my experience developing policies and rules related to corporate laws and regulations, corporate governance, and international investment and responsible corporate behavior within the OECD, and through my background participating in various governmental committees and research groups.

The major auditing themes in fiscal 2020 included:
- Status of response to anticipated risks related to promoting management plans such as the impact of COVID-19, and impairment and business continuity risks,
- Management frameworks and effectiveness of operations in the key Digital Workplace Business and the new business unit for precision medicines,
- Status of development and operation of information security management systems for DX businesses, and
- Operational status and effectiveness of global quality systems. The status of activities related to these themes were confirmed through meetings such as with the president, Executive Officers and External Accounting Auditors and through monitoring of auditing activities. This was then discussed at the Audit Committee.

Focusing on auditing of Group companies in Japan and overseas

Konica Minolta has undertaken dozens of M&As over the last ten years, therefore we are focusing on auditing of Group companies. With this background, as a Group we aim for autonomous internal control whereby the internal controls of each company function appropriately. In terms of auditing also, we focus on ensuring risk management is being implemented sufficiently at each company.
Further, we follow up on the KPIs set for each key Group subsidiary and inspect the status of response to market environment changes from moment to moment. Also, any time a company is acquired we undertake a valuation of the goodwill of the company in collaboration with the External Accounting Auditors.
Moreover, for overseas Group subsidiaries, we also focus on confirming whether the situation of subsidiaries is being appropriately grasped such as the status of their management— regardless of whether they have good or bad financial results—and the establishment and operation of management systems by business execution departments.

In this current age known as one of volatility, uncertainty, complexity, and ambiguity—or VUCA—flexible and effective auditing is more in need than in the past. In this time of difficulty in predicting the future, I, as Chairperson of the Audit Committee, want to focus on: ‘ensuring my viewpoint is tailored to each work situation, even amidst limitations imposed by COVID-19’ and ‘ensuring I remember to look at the details while not forgetting macro trends such as our Vision and medium-term business plan.’ Additionally, in the midst of everything in nature surrounding global corporations, I want to carefully work to find the important impacts on our Group business and unwaveringly implement auditing based on a risk approach.
I want to continue responding to our mandate to shareholders and contributing to improving medium to long term corporate value by working to improve audit quality on a daily basis through effective collaboration with various actors such as the Board of Directors, the Nominating and Compensation Committees, internal audit departments, and External Accounting Auditors. 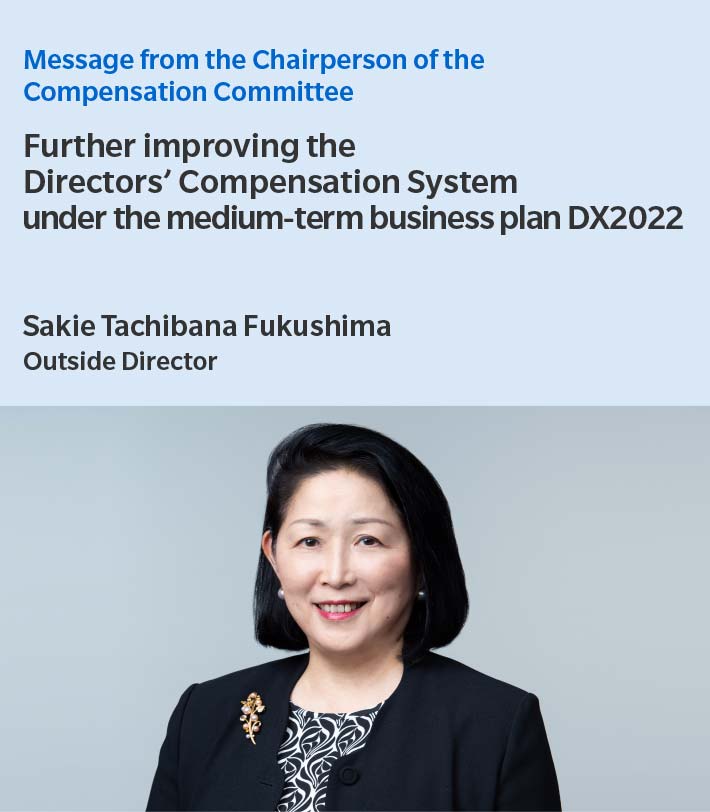 profile
Ms. Sakie Tachibana Fukushima served as Member of the Board of Korn/Ferry International (Global Headquarters) and President and Chairperson of its Japanese subsidiary. She has also served as President and Representative Director of G&S Global Advisors Inc. In addition to extensive experience as the former Vice-Chairman of the Japan Association of Corporate Executives and a broad range of experience and knowledge about the management of human capital, she has an extensive range of knowledge about corporate governance. Ms. Fukushima was appointed Outside Director at Konica Minolta in June 2019.

The current form of the Compensation Committee

There are three key aspects of revisions to policy for determining compensation and of the partial revision of the Directors’ compensation system.
The first key aspect is the review of indicators for evaluating performance-based bonuses for executive officers. The evaluation indicators for annual performance-based cash bonuses changed from operating profit, operating profit ratio and ROA to operating profit, operating profit ratio, operating cash flow, and KMCC-ROIC*. The evaluation indicators for medium-term stock bonuses (performance-linked) were changed from operating profit and ROE to operating profit, operating cash flow and ROIC. The objective of setting operating cash flow as an indicator is to secure underlying capital for strategic investment to transform our business portfolio and dividends; and for KMCC-ROIC and ROIC the objective was for improving the efficiency of invested capital. The review of indicators was also linked with the management targets of DX2022.
The second key aspect is the review of the payment rate of performance-based cash bonus for executive officers. The payment rate—for annual performance-based cash bonuses and medium-term stock bonuses (performance-linked)—was set to between 0 and 200% depending on the level of target attainment. While the former upper limit of 150% was increased to 200%, this was not merely an increase in the upper limit, but the creation of a more dynamic relationship between the target attainment rate and payment rate. The intent of which is to further encourage the attainment of performance targets by each executive officer.
The third key aspect is the adoption of a long-term stock bonus for executive and non-executive Inside Directors. The long-term stock bonus is distributed to Directors in the form of Company shares after their retirement as a Director, and is based on their position, roles and years of service. The bonus is aimed at incentivizing efforts to improve shareholder value over the long term.
We hope to support the solid execution and completion of DX2022 in this three-year term by executive officers toward sustainable Group growth and medium to long term improvement in corporate value through these revisions and reviews.

*  KMCC-ROIC is ROIC to calculate annual performance-based cash bonus for the relevant fiscal year, defining invested capital as assets that can be separately managed and improved by each business segment.

Securing human capital in new fields will also become important due to increased competition in different markets to our traditional ones as we progress with revision of our business portfolio under DX2022. When we reach that stage, it will be necessary to rapidly reinvestigate benchmark companies to confirm the status and positioning of our Directors’ compensation system (composition and levels of remuneration). Additionally, in future our management team is expected to become more international, therefore I think we will immediately need to investigate compensation systems that are competitive in the global market.
Even in such times of great change, we will continue to investigate and review our Directors’ compensation system with a view to one optimal to the times while always taking into consideration the trends in the global human capital market and while confirming our place and standing within it.