Sharp, bright stars shining in a dark sky, the Milky Way with a feeling of depth, and ultimately refined silence.
The Infinium Σ brings together all of the technology that Konica Minolta has accumulated to date to form the ultimate optical planetarium with a thorough focus on a natural night sky. 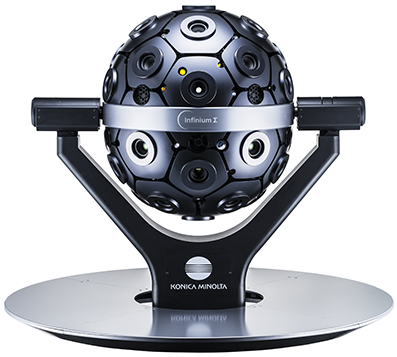 The Good Design Awards are held by the Japan Institute of Design Promotion, which aims to lead the way to enrichment of lifestyle, industry, and society as a whole through the selection and recognition of good design from a wide and varied range of products, in order to comprehensively promote good design.
The predecessor for this was the “Good Design Selection System” (known as the “G-Mark System”) instituted in 1957 by the Ministry of International Trade and Industry (now the Ministry of Economy, Trade and Industry), and has been held for around 60 years.

Complete overhaul of the external composition of the starball (the component that contains the projectors for fixed stars) Positioning of principle composition as aesthetic beauty.

For the design that divides the main light source into 32, by using a 32 section chassis structure with 20 mathematically stable hexagons and 12 pentagons, it achieves an orderly and stable structure based on its fundamental principles. The rigid parts are put together with high precision through thick joints, and the product has received praised for having a presence suitable for a device that visualizes the principles and order of space, celestial bodies, and stars.

The Machine Design Awards were established in 1970 by The Daily Industrial News with the backing of the Ministry of Economy, Trade and Industry aimed at promoting and developing Japanese machine design. Awards are given to machine products that are not only well designed but also have excellent functional beauty as selected by a screening committee comprised of external experts. This year is the 46th time it has been held, and the many products that have won awards over this period have received high praise as leading products that provide hints for the way design is heading in a given generation.

As well as drastically increasing the potential of optical planetariums, it was highly praised for the fact that it raises an attraction into the realms of service design, and this led to its receiving of the award here.

Realistic reproduction of stars with a specially designed optical system

With its natural and beautiful night sky rich in tonality that focuses on stars that shine in the dark sky, its highly detailed reproduction of nebulae, star clusters, and a Milky Way with a feeling of depth, and other features, it exhibits a highly sophisticated finish. The newly developed optical system that improves long focus length and brightness expands the design width and achieves a night sky with a rich tonality. (from screening comments)

As well as being able to display atmospheric extinction that changes brightness and blinking by using LEDs, brightness of fixed stars has also been increased by a factor of 1.5 over conventional brightness. Bright stars also achieve a very sharp image. Lamp lifespan is 30,000 hours (30 times longer than standard) and the power consumed is 1.3kW (3/5 of standard), which greatly increases maintainability and economic feasibility. (from screening comments)

Noise elimination measures and external design with a sense of precision

The specification for noise during operation is 45dB or less. The appearance of the product is a soccer ball shape to which a unit cover composed of pentagons and hexagons is attached with a metallic coloring based on black that recalls the darkness of dark, and the cradle and base employ a leather-tone finish to achieve an atmosphere of precision and quality. The result of stylishly processing the precise and revolutionary geometric shape with a dynamic and mechanical image is the creation of an aura suitable for a flagship product. (from screening comments) 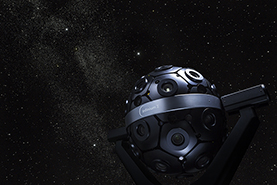 Main features of the Infinium Σ 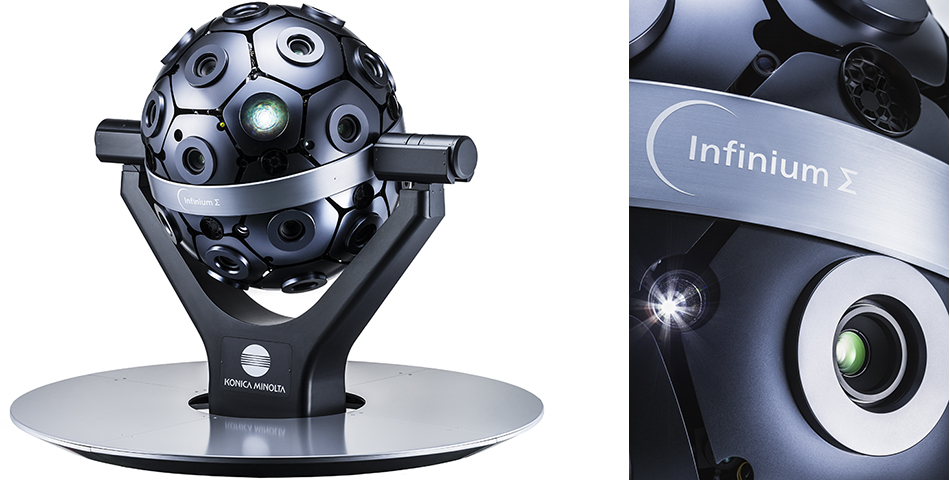 The light source uses ultrabright, long life LEDs from a Japanese manufacturer, and with its evolved fixed star origin processing technology achieves an increased feeling of realness for fixed stars and the Milky Way. Furthermore, the fixed stars that are projected with the 32 divisions can be illuminated and extinguished individually for each division, and bright stars can also be illuminated and extinguished individually, which has stepped up the range displays that are optically possible. 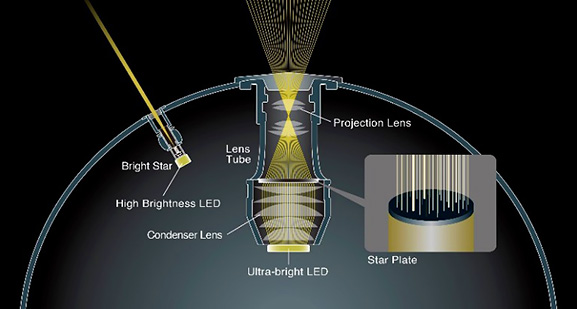