Click to jump to the corresponding section in this page

In 2009, Konica Minolta signed the Global Compact, which consists of 10 principles, related to human rights, labor, the environment, and anti-corruption, advocated by the United Nations.

The Global Compact is a set of voluntary action principles for businesses proposed in 1999 by then UN Secretary-General Kofi Annan and officially established at the United Nations Headquarters in 2000. It is an initiative to achieve sustainable growth on a global scale by encouraging businesses to act as upstanding members of the international community by demonstrating responsible, creative leadership in solving various worldwide problems, including global warming, environmental problems, and economical stratification in society.

Konica Minolta participates in various working groups of the Global Compact Network Japan, and it makes use of these experiences in its CSR procurement initiatives.

Konica Minolta joined the RBA in October 2013 and has been acting as a member to strengthen its CSR procurement in the supply chain.
The RBA, which is made up of more than 170 companies, including the world’s leading electronics manufacturers and their major suppliers, works to improve worker rights (human rights and working conditions), ethics, health, and safety in the supply chain. 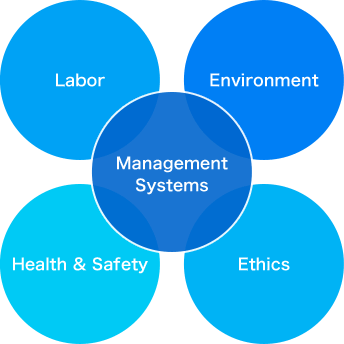 Working to improve labor conditions (human rights), ethics, the environment, and safety and health in the supply chain

Companies have to take social responsibility not only for their own products but also for improving labor conditions (human rights), ethics, the environment and health and safety in the supply chain used to deliver products to customers. In line with this recognition, Konica Minolta promotes CSR procurement that pursues these kinds of improvements together with its business partners who supply and produce materials such as raw materials, parts and components, as well as Group production sites, with the aim of establishing a sustainable society in which human rights are respected.

Laws such as the California Transparency in Supply Chains Act and the UK Modern Slavery Act 2015 have been enacted in recent years. More than ever, companies’ human rights initiatives must also address the issues of slavery and human trafficking. In response to social demands like these, the RBA*2 has been updating its code of conduct and various systems. As an RBA member, Konica Minolta will make use of the RBA’s framework to address these social issues.

*1
Supply chain: The series of activities involved in delivering a product or service to a customer, ranging from procurement and production to distribution and sales.
*2
Responsible Business Alliance (RBA): Organization that promotes CSR in the supply chain.

Konica Minolta strives to ensure socially responsible procurement by requesting suppliers to participate in CSR activities, assessments, and audits, and thus helping them to improve.

Konica Minolta has implemented a four-step CSR procurement promotion program to address any issues related to labor conditions (human rights), ethics, the environment, and health and safety in its supply chain.
First, suppliers are requested to carry out CSR activities based on clearly articulated standards to be maintained in line with Konica Minolta’s procurement policies and Supply Chain Code of Conduct. Suppliers from which the Group makes purchases directly are asked to acknowledge and implement the Code to their upstream suppliers.
About 100 suppliers identified to be particularly important to Konica Minolta’s business in terms of transaction volume or the irreplaceability or importance of the parts they handle are requested to use the Responsible Business Alliance's Self-Assessment Questionnaire (RBA SAQ) to carry out a CSR assessment that confirms their level of implementation of the Konica Minolta Supply Chain Code of Conduct. Where assessment results do not meet targets, Konica Minolta requests suppliers to implement corrective actions.
Further, the Group conducts CSR audits on suppliers that are especially important for its business and on suppliers that did not achieve targets despite making improvements. CSR audits are carried out primarily in the style of Konica Minolta CSR Audits*1, with an RBA third-party audit (VAP audit*2 )conducted in case as appropriate.
Konica Minolta provides support to help suppliers improve any issues that come to light through the CSR assessments and CSR audits. The aim of Konica Minolta’s CSR procurement promotion program is ultimately to empower its suppliers to implement self-directed CSR activities.
Finally, the Group sometimes considers ending business with suppliers that do not make any improvement at all despite the support provided.

*1
Konica Minolta CSR Audit: Konica Minolta auditors who have RBA qualifications implement an audit based on RBA Audit standards.
*2
RBA third-party audit (Validated Audit Program [VAP] audit): An audit conducted by a third-party auditing organization certified by the RBA to confirm the status of compliance with the RBA Code of Conduct based on audit standards, identify points for improvement, and encourage correction. As a third-party CSR audit, the RBA VAP audit is one of the most trusted in the world.

From fiscal 2017 to fiscal 2019, while requesting suppliers to undertake CSR activities, Konica Minolta also confirmed their cooperation with the policies and standards by written consent. The response rate was 98%.

CSR assessments using a Self-Assessment Questionnaire are conducted at production sites and important suppliers in order to assess the level of implementation of the Konica Minolta Supply Chain Code of Conduct.
Konica Minolta has conducted CSR assessments using the self-assessment questionnaire based on the RBA framework since fiscal 2009. The CSR assessment evaluates site initiatives to address social issues such as labor (human rights) protection, ethics, and health and safety, as well as environmental issues such as minimizing environmental impact. Konica Minolta classifies the results of the self-assessment questionnaire from rank A to C. The targets for overall scores are rank A for all Group production sites and rank B or higher for all suppliers. Rank C suppliers are considered to be high-risk, and CSR audits are conducted for those suppliers that have not achieved their targets even after implementing improvements.
In fiscal 2020, four Group production sites and 40 suppliers implemented the assessment, with all production sites achieving rank A and all suppliers achieving rank B or higher on their overall score. There were no high-risk rank C suppliers. These assessment results met the target, but suppliers whose scores for specific components such as labor issues (human rights), ethics, environment, or health and safety revealed weaknesses were asked to make voluntary improvements. It is also notable that there was a trend toward relatively low scores in the area of ethics and the environment. 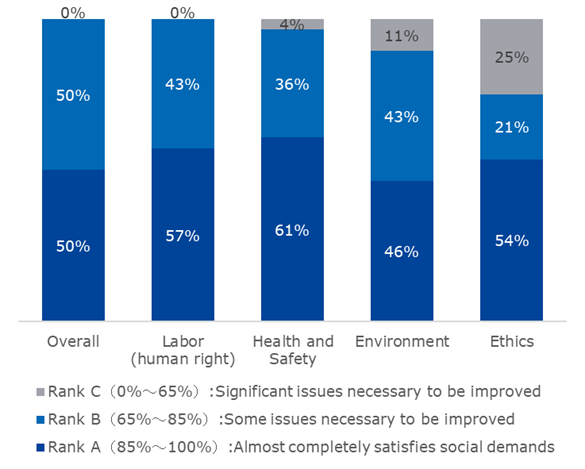 Konica Minolta has been promoting improvement to the audit findings since 2014, by implementing RBA third party audit (VAP audit) at first. Based on this knowledge, Konica Minolta CSR Audits*1 have been introduced at the companies who produce the main units for multi-functional peripherals (MFPs)/printing equipment. In fiscal 2017, the audit target was expanded to include not only the company manufacturing the main unit of the MFPs, but also materials for MFPs, including the company that produces consumables such as toner cartridges, etc., and a CSR audit was conducted. Bases for the final production in Konica Minolta’s mainstay business, the Office Business, are mainly located in Japan, China, and ASEAN. Konica Minolta places great importance on audits at those bases in order to practice high-quality craftsmanship as a manufacturer and to carry out CSR-oriented production activities. The implementation rate of RBA third party audits (VAP audits) and Konica Minolta CSR Audits up through fiscal 2020 is 86%. These CSR audits uncovered several issues, such as management of total working hours, implementing training in areas such as labor and ethics, and the construction of an internal auditing system. To solve these issues, the audited company created and implemented an improvement plan, and a closure audit showed that the improvements have been completed. The non-conformance rate in RBA third party audits (VAP audits) and Konica Minolta CSR Audits was 7%. The completion rate for corrections of priority non-conformance points was 100%. The completion rate for correction of other non-conformities was 56%. Konica Minolta will continue to improve conformity through the use of plan-do-check-act (PDCA) cycles.

At Konica Minolta Business Technologies (WUXI) Co., Ltd., located in China, an RBA third-party audit (VAP audit) was conducted in fiscal 2014 and made corrective actions. In fiscal 2017, the new internal audit system was used to conduct a self-evaluation and make improvements on problem areas such as labor, safety and health. The internal audit system will remain in use in the future to make continued improvements.

Konica Minolta Business Technologies (Dongguan) Co., Ltd. in China, and Konica Minolta Business Technologies (Malaysia) Sdn. Bhd. have already completed Konica Minolta CSR audits. In order to improve issues identified in their audits of fiscal 2016, the two companies established internal audit systems and implemented training about RBA audit standards and CSR issues to their internal auditors. This led to the establishment of systems that enable continuous improvement. The two sites are also continuing to work on improvements concerning some of their remaining labor issues. 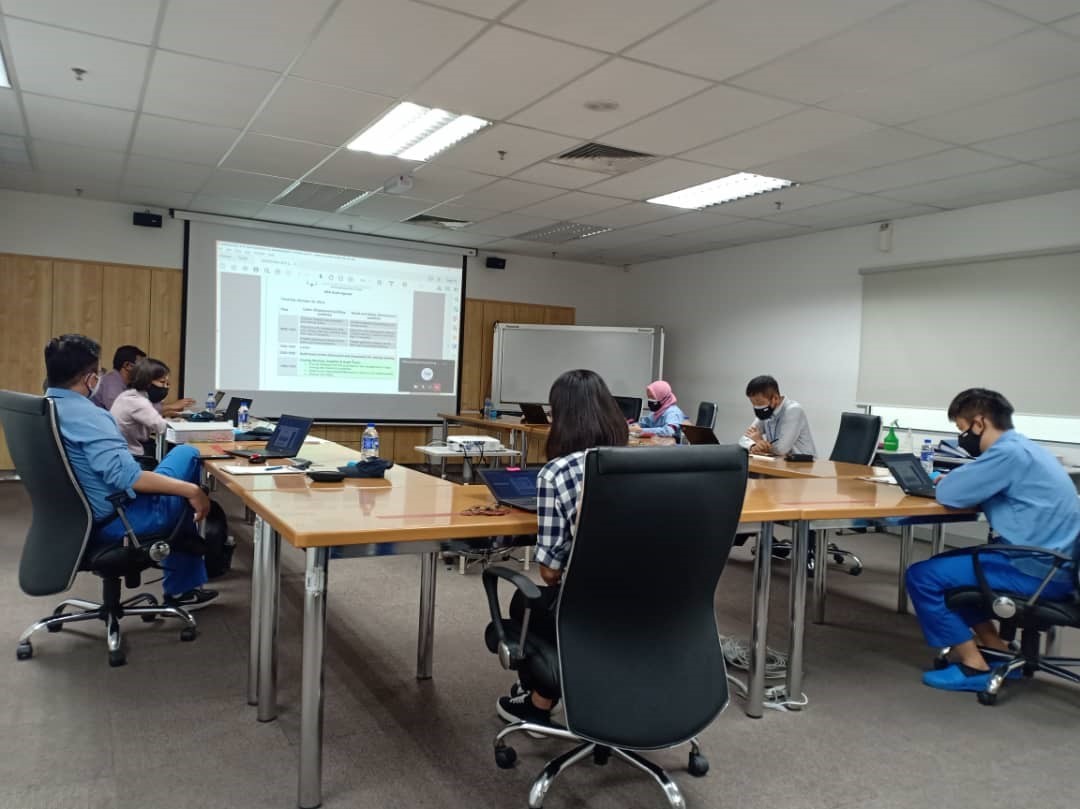 Support and Incentives for Suppliers

Aiming to encourage suppliers to engage in self-directed CSR activities, Konica Minolta explains to suppliers the social expectation for CSR procurement, including customer demands, and provides education related to RBA audit standards required in CSR assessments and CSR audits. Also, based on the results of the assessments and audits, the Group provides suppliers with support for improvements that make use of Konica Minolta’s knowledge.

In fiscal 2017, a Chinese manufacturer, Dong Guan Konka Mould Plastic Co., Ltd., which implemented a Konica Minolta CSR Audit in fiscal 2016, was given support to conduct its own internal audit the following year, including education to their internal auditors. This support is helping the company to establish a framework for its own continuous improvement.

In order to succeed with CSR procurement, the Konica Minolta Group must ensure that relevant personal understand its CSR procurement objectives and tools for implementation. Every year, training is conducted on the importance of helping to create a sustainable society by promoting CSR procurement. Other topics include social trends related to CSR, trends in laws and regulations worldwide, and the need for internal CSR procurement initiatives. Training is provided to about 50 people each year, including members of the human resources, procurement (buyers), and environmental affairs departments in Konica Minolta, Inc. and its production sites. 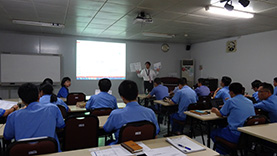